What is Red Light Therapy?

Red Light Therapy, formerly known as Low-Level Light Therapy (LLT), is a type of therapy that exposes the human body to low levels of red and infrared light for the purpose of treating chronic skin conditions such as acne, wrinkles, scars, uneven skin texture, and sun damage.

Aside from its skin-related benefits – it has also become a popular treatment for aiding weight loss, reducing body fat, and body contouring. This form of body contouring is non-invasive and painless, making it appealing to individuals who want to make subtle improvements in their appearance without waiting months to recover from surgery fully.

In 1896, Dr. Finsen developed a treatment for Tuberculosis, specifically Lupus Vulgaris, using light therapy. This procedure took hours to perform. However, the treatment successfully healed lesions associated with the disease. This form of light therapy was so successful that Dr. Finsen was later awarded the Nobel Prize in Physiology.

In 1960, the first laser was invented by Theodore H. Maiman despite Albert Einstein theorizing modern laser principles in 1917.

Lasers quickly became a breakthrough technology for both clinical and domestic uses. Laser therapy, a form of photobiomodulation therapy, uses concentrated red and near-infrared light for a precise application. Laser therapy causes (controlled) damage to the skin while Red Light Therapy does not.

In 1967, Endre Mester created the first low-level laser therapy device and tested its effectiveness in treating the effects of skin cancer. The device later became FDA-approved for wound healing processes. However, this was not until 2002.

LED Light Therapy came not long after this and became incredibly popular during the 1990s. LED light bulbs became cheaper to produce and more efficient during this time, making them ideal for mass production.

It is important to note that this form of therapy is not as strong as a laser. However, this form of light therapy is beneficial for different purposes. Blue and green LED lightweight devices are used to treat migraines and chronic skin conditions such as acne.

These devices were able to provide impressive results over the long term, such as reduced inflammation and improved skin texture. Physical Therapists also used LED therapy for sports-related injuries and quickly noticed the rapid recovery time in their patients.

Researchers have started to make significant breakthroughs in terms of non-invasive treatments that address body fat and unwanted weight gain at this point in history.

It’s only been in recent years that researchers have observed Red Light Therapy’s ability to reduce body fat in specific areas such as the stomach and promote weight loss through its effects on hormones such as Leptin and Ghrelin.

How Does Red Light Therapy For Weight Loss Work? 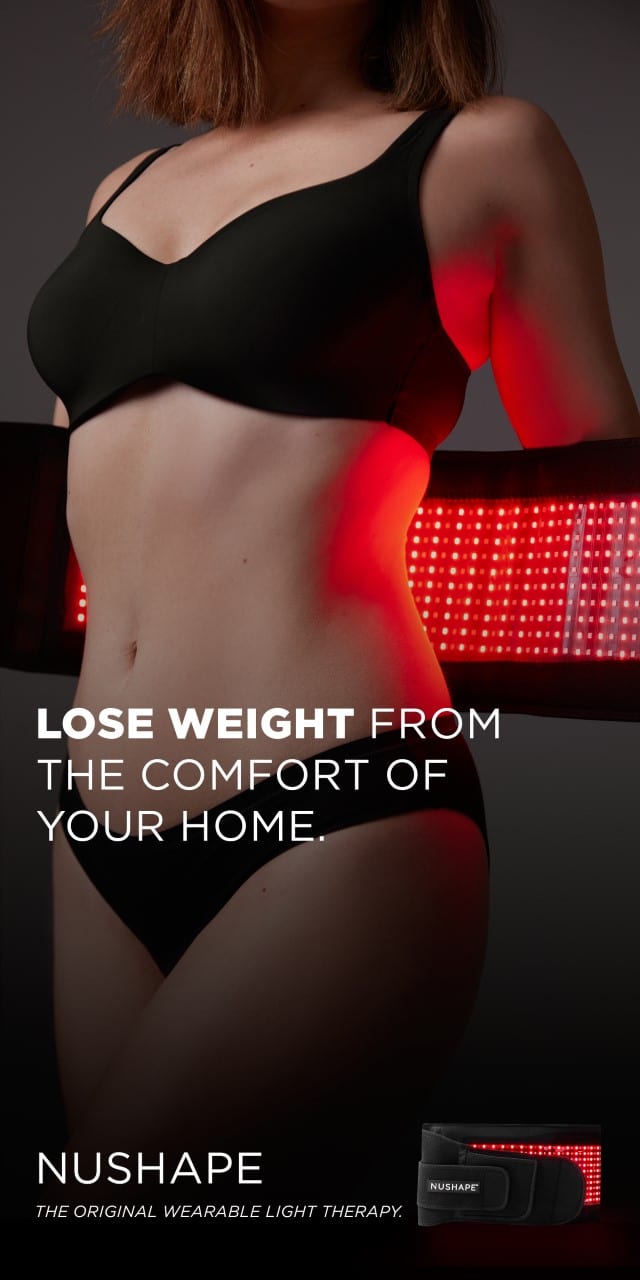 Red Light Therapy (RLT)  strengthens the mitochondria – the cell’s powerhouse – where cell energy is created. Adenosine Triphosphate (ATP) is the critical energy-carrying molecule that is found in all living organisms. By optimizing the function of the mitochondria, more ATP energy can be produced. With this increased energy, cells can function optimally, repair damage and turnover more quickly.

RED light has also helped in addressing the adverse effects caused by blue light by promoting cellular balance. Blue light is becoming a more serious issue as a large percent of the population is looking at screens for long periods daily.

When using Red Light Therapy, patients will see and feel the warmth of the near-infrared (NIR) light. This painless treatment penetrates beneath the skin’s surface, allowing light to penetrate chronic skin conditions at its core. Another great benefit of RLT is it gives your body the sunlight it needs without the UV rays that can cause severe sun damage.

What Are The Benefits Of Using Red Light Therapy For Weight Loss?

How Does Red Light Therapy For Weight Loss Help To Lose Fat?

Red Light Therapy is a form of body contouring that is non-invasive and allows patients to reduce fat in specific areas. While it takes several sessions to see results, it is an excellent option for those looking for a short-term solution to addressing unwanted body fat.

A study conducted in 2012 by the International Journal of Endocrinology revealed that red light therapy had additional benefits in individuals who want to lose weight. This study focused on the effects of light on leptin and Ghrelin.

This study analyzed individuals with lousy sleeping habits – reduced sleep resulted in weight gain due to the increased production of Ghrelin and the reduced production of leptin. Their research concluded that red light therapy increased leptin levels significantly while lowering Ghrelin – resulting in reduced appetite and improved weight loss.

Another study published in the Lasers in Surgery and Medicine explored Red Light Therapy’s effects on metabolic inflexibility when combined with physical training. The study divided 64 obese women into two groups. The first group (controlled group) exercised and received a placebo light treatment. The second group exercised and received red light therapy immediately afterward. This study was carried out over five months. Researchers concluded that there was a more significant reduction of fat mass and increased muscle mass compared to the controlled group.

This study actively illustrates that there is a significant difference between weight loss and fat loss. Many think that they want to lose weight, but they actually want to lose fat in reality. When the goal is weight loss there are fewer factors to consider. Macronutrient breakdown and food quality aren’t as important as calories consumed versus calories burned.

On the other hand, fat loss is much more challenging because one must take into account the macronutrient breakdown within the food, water intake, quality of sleep, and regular exercise. Body recomposition ultimately causes the most considerable change in one’s appearance. Fat loss is already a challenge on its own, and Red Light Therapy simply speeds up the process in a pain-free and non-invasive. This treatment has become increasingly common in the United States, where obesity is a nationwide epidemic.

The last study worth referencing is this 2011 study published in Obesity Surgery, where Red Light Therapy caused the adipocytes to release triglycerides which later resulted in a measurable loss of fat, specifically in their waist.

Individuals that struggle with thyroid issues may also significantly benefit from Red Light Therapy. Red Light Therapy helps regulate thyroid function, but it also improves cellular metabolism and decreases the recovery time needed between workouts. This helps keep fatigued and soreness at bay so individuals can focus on what really matters.

While there has been a significant number of studies that have been conducted, Red Light Therapy for weight loss continues to be a controversial subject in the medical community. Red Light Therapy is an excellent tool in addition to diet and exercise. However, the primary focus should be, developing a healthy lifestyle that can last long.

Risks and Side Effects of Red Light Therapy for Weight Loss

With every medical procedure comes its downsides and side effects; it is essential to note that although Red Light Therapy can be quite beneficial, there have been reports of burns and blistering caused by Red Light Therapy Devices.

Red Light Therapy for weight loss is a breakthrough technology that is slowly but surely becoming common in treating chronic skin conditions and unwanted body fat because of its painless and non-invasive nature. The evidence is evident in the studies mentioned throughout this article that fat loss doesn’t need to be complicated and exhausting. Luckily, Red Light Therapy is becoming more accessible as the market for FDA-approved Red Light Devices for home use has grown significantly in recent years. However, before beginning red light therapy, it is essential to consult with your doctor or a board-certified dermatologist to ensure safe.

RedLightTherapyNews.com is a participant in the Amazon Services LLC Associates Program, an affiliate advertising program designed to provide a means for sites to earn advertising fees by advertising and linking to Amazon. Certain content that appears on redlighttherapynews.com comes from Amazon Services LLC. This content is provided ‘As Is’ and is subject to change or removal at any time.

This website is an advertising marketplace for companies that provide consumers with products and services.  These products are not intended to diagnose, prevent, treat, or cure any disease. This information does not constitute medical advice and should not be relied upon as such.

We use cookies on our website to give you the most relevant experience by remembering your preferences and repeat visits. By clicking “Accept”, you consent to the use of ALL the cookies.
Do not sell my personal information.
Cookie SettingsAccept
Manage consent

This website uses cookies to improve your experience while you navigate through the website. Out of these, the cookies that are categorized as necessary are stored on your browser as they are essential for the working of basic functionalities of the website. We also use third-party cookies that help us analyze and understand how you use this website. These cookies will be stored in your browser only with your consent. You also have the option to opt-out of these cookies. But opting out of some of these cookies may affect your browsing experience.
Necessary Always Enabled
Necessary cookies are absolutely essential for the website to function properly. These cookies ensure basic functionalities and security features of the website, anonymously.
Functional
Functional cookies help to perform certain functionalities like sharing the content of the website on social media platforms, collect feedbacks, and other third-party features.
Performance
Performance cookies are used to understand and analyze the key performance indexes of the website which helps in delivering a better user experience for the visitors.
Analytics
Analytical cookies are used to understand how visitors interact with the website. These cookies help provide information on metrics the number of visitors, bounce rate, traffic source, etc.
Advertisement
Advertisement cookies are used to provide visitors with relevant ads and marketing campaigns. These cookies track visitors across websites and collect information to provide customized ads.
Others
Other uncategorized cookies are those that are being analyzed and have not been classified into a category as yet.
SAVE & ACCEPT